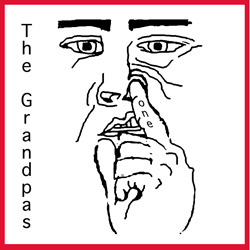 for several years now, i've fantisized/threatened to do a bran(...)pos show and hire a bunch of oldtimers to show up and play a 'grandpas' show instead. yukyuk--see, it rhymes. but recently in denver, i was put on a bill with a band called The Grandpas which initially made me sad as i thought they'd end up being a crappy punk band but once they started made me leap outta my pants to attention. using synths and drums, the trio of young fellas did a set of stop/start rhythms and karaoke-clowning that was amazingly ridiculous and musically complex and seemed to end and start up again about 30 times in their approximately 10 minute-long set. suffice to say i loved it and decided if i couldn't do my bran(...)pos/grandpas joke, then the least i could do is release their next cd (which, it turns out, is the band's first cd!).

cut to 4 months later when i have received the material from the band and wowza! they have dropped an entirely unexpected bomb on me with this cd ONE: 1 track, 80 minutes of nonstop super-fast hardcore 4/4 with the original trio expanded to a 5-piece band with sax and cello (though i swear i hear trombone in there also) added to the mix resulting in one of the most intense ridiculous spazz-rock listens EVER. somewhere between the boredoms super roots 3/ borbetomagus/anthony braxton's ghost trance/zorn-painkiller /lightning bolt/and f-on the floor techno--the music is painfully loud and hyper-energetic, addictive and just never lets up until your mind gives in and shuts down. i think i may have permanently damaged my hearing and my brain from listening to this cd--so listen with caution. simple paper sleeve with unmarked cdr.